The meaning of Christmas... In the ancient land of Judea, mysterious dignitaries from the East arrive with tales of  a star that heralds the birth of a great king.  Neither Caesar nor Herod will tolerate any rivals.  So brutal hordes are sent to slay all the infants in the region to make sure the usurper is eliminated.  The thugs are thwarted, but only for a season.  For the royal child is laid in a manger, and the wood of that manger foreshadows the wood of the cross.

Caesar and Herod were bound to misunderstand Him.  They climbed their way to the top, stepping on all who stood in their path.  Jesus emptied himself and plunged to the bottom, from the glory of heaven to the squalor of a stable.  Pharaohs and Caesars strained towards immortality.  Yet He who was Immortal by nature embraced mortality.  The great ones of the world exalted themselves.  In the very act of being born, He humbled himself. 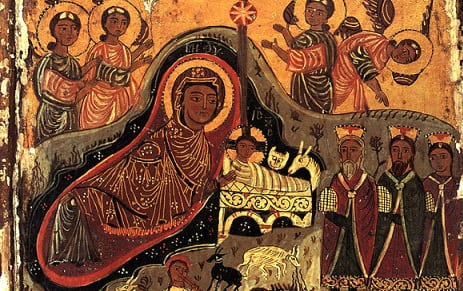 You would think that He would have chosen to make his debut in Rome or Athens. But He selected an obscure desert town in a dusty, provincial outpost.  Even in this humble spot, not even a seedy inn would make room for Him.  So they had recourse to a cave, welcomed only by animals.  Isaiah said it well: “an ox knows its owner, and an ass its master’s manger; but Israel does not know, my people has not understood” (Isaiah 1:2).

Everything that happened on that first Christmas was in fulfillment of Scripture.  He was born in Bethlehem, a town whose name means “house of bread.”  Though His crib was a manger–a feeding trough–they did not understand that He was the Bread of Life.  He was wrapped, like Solomon, in swaddling clothes (Wisdom 7:4-5), but they did not recognized him as the new King and embodiment of divine wisdom.

The only people who recognized Him were shepherds, the humblest in society, and Magi, the wisest.  But most Israelites, like us, were neither very humble nor very wise, so they missed it.  They especially missed this–that one of the birthday gifts was incense, used in the worship of gods.  He was not only king, wise man, messiah, and savior–he was God incarnate.

How could Jews have believed this?  God is infinite, invulnerable, and omnipotent. What is more vulnerable, fragile, and helpless than an infant?  Is it possible that the Eternal be born in time?  Can the Divine Word be a child at the breast, incapable of speech? Can a mere teenage girl be the Mother of God?

It was just as hard for the pagans to believe it.  For their philosophers had taught that God is spirit and the body is a prison.  Salvation for them meant liberation from the confines of the physical body.  So the idea that a divine Savior would embrace human flesh just did not make sense.

Love sometimes does strange things.  It takes great risks and goes to extreme lengths that many would call foolish.  On that first Christmas day, God’s foolishness was wiser than men, and his weakness was stronger than men.  It took them all by surprise.

CHRISTMAS & THE PRINCE OF PEACE

But this, of course, was part of God’s strategy.  The element of surprise is critical in warfare.  And Christmas was an act of warfare.  In fact it was D-Day, the day of deliverance.  The preparation had taken centuries, but now it was time for the Conqueror to land on enemy occupied territory.  He came in humility, and would finish the conquest thirty years later by the greatest act of humility the world had ever seen.

“Peace on Earth, Good will towards men.”

True peace can never be forged by steel, but only by love.  It is the humble babe in the manger, not Caesar in his chariot, who is the real prince of peace.