Those of you who are a Assassins Creed Fan a new movie is coming soon.
In  theaters 12-12-16 !!!!!
We will be adding some  McFarlane  Assassins Creed Action Figures series (1) to our Website next week, so stay tuned. 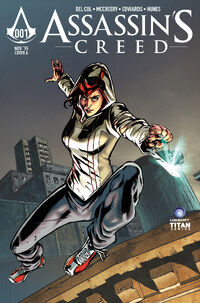 Assassin's Creed is an upcoming comic series published by Titan Comics.[1] An ongoing series,[2] the first issue is slated for release in October 2015.[3]

The first story arc will be taking place in the late 17th century, during the Salem witch trials, with the parallel modern-day part featuring an espionage tale.[4]

Charlotte de la Cruz is over-educated and underemployed, wasting her time in a dead-end job in San Diego, and spending her free time chasing down conspiracy theories on the dark side of the internet.

When a real-life conspiracy crashes into her life, she's pulled into the orbit of the Assassins, a mysterious organisation of principled killers with roots stretching back thousands of years - and users of the stolen Animus technology, which allows them to experience the memories of their ancestors as if they were there!

Charlotte has a secret in her blood... the genetic memory of an ancestor who was in Salem at the time of the infamous witch trials: Tom Stoddard, an Assassin who witnessed a dark act with repercussions for the present day!

As Charlotte is trained in the Assassins' art, and as she begins to investigate the life of her ancestor... the forces of the Templar Order move against her. Will Charlotte learn the skills she needs to survive, and the truth she needs to prove her worth - before the Templars silence her forever?

Home / News / Tagged: Assassin's Creed
Log in Create an account
Search About Us Ebay Pay me back using my PayPal.Me link: